Today, Glooko and Joslin Diabetes Center announced the release of the Joslin HypoMap powered by Glooko, a jointly developed software module for identifying and improving hypoglycemia unawareness. HypoMap centers on a patient survey that will sit within the existing Glooko mobile app (see figure one below). After patients upload glucose data from any of the 27+ supported glucose meters using Glooko’s universal MeterSync cable, HypoMap will flag episodes of low blood glucose that have occurred within the past two weeks. Patients will then be prompted to enter contextual information about the hypoglycemia episodes – what symptoms were experienced, what they think caused the low, and how it was treated. On the backend, the data will be sent to three reports in Glooko’s web-based Population Tracker (launched in February), where providers can follow patients, identify those at high risk, and dive into particular hypoglycemia episodes.

HypoMap is only available to Joslin patients right now, though as Glooko scales up and expands from the current controlled launch, more providers will get access to the product. As we noted in our previous coverage, Glooko provides payers/health systems with Population Tracker in exchange for a monthly/per-patient fee – always great to see a business model in mHealth!

In speaking with Joslin’s very smart Dr. Howard Wolpert, he emphasized that a guiding philosophy for the entire system is to create “teachable moments” that can improve patients’ self-management and tailor clinical conversations to patient needs. Indeed, as shown in figure two below, we think Glooko and Joslin have done a terrific job of linking the patient-inputted survey data to a heat map that plots glucose levels against the symptoms experienced. One quick glance at the top left of the plot will quickly help providers identify whether patients are hypo aware or not (i.e., if they are experiencing autonomic symptoms at glucose levels >60 mg/dl). The heat map also allows patients to improve their hypoglycemia recognition by identifying their individual specific symptoms. The other reports are discussed below.

Of course, the key input to HypoMap is that patients must manually enter the contextual data surrounding a hypoglycemia episode, which gets more difficult as time passes between the event and the data upload (up to two weeks in HypoMap). Glooko has made excellent strides in making meter data upload fairly hassle free in the current system, and this will no doubt improve once the company launches its universal Bluetooth upload product – as we understand it, this will be on display in the ADA 2014 exhibit hall. Furthermore, we believe there is lots of potential for reminders and prompts to encourage patients to upload data more frequently.

Below, we enclose many further details on HypoMap, discuss how it fits into changing healthcare delivery, and highlight Glooko/Joslin’s plans for future improvements. 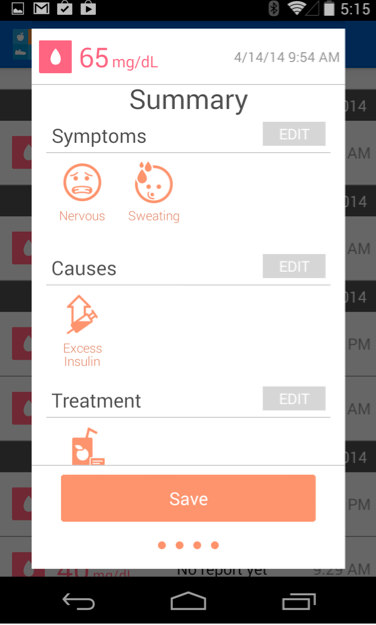 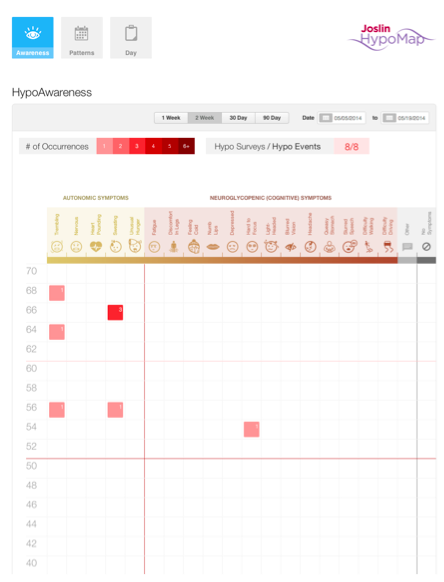 --by Adam Brown and Kelly Close