For the second consecutive summer, our team had the privilege of visiting the Joslin Clinic’s long-running camp for children with diabetes – Camp Joslin – as Drs. Ed Damiano and Steve Russell conducted the second installation of their summer camp studies of the bionic pancreas. Tucked away in rural Massachusetts, the study included only six boys – a smaller enrollment relative to last year’s 16 given the challenges of recruiting a much younger population (ages 6-12). Each participant served as his own control, meaning five days of usual care at camp were compared to five days of 24-hour closed-loop control wearing the bionic pancreas. Three boys at a time wore the bionic pancreas, which still includes two Tandem t:slim pumps (insulin and glucagon), a Dexcom G4 Platinum sensor and transmitter, and an iPhone 4S running a control algorithm. A similar girls’ study took place two weeks earlier and enrolled 13 campers, for a total of 19 participants in this round of the study. As a reminder, the 2013 camp study was published in NEJM simultaneous with Dr. Russell’s oral presentation at ADA 2014.

A key change from last summer’s study was less reliance on remote monitoring, a testament to greater FDA comfort with the system – this year, nurses did not receive continuous glucose data from the campers and were only alerted when blood glucose levels remained below 60 mg/dl for 15 minutes, which prompted a fingerstick blood glucose measurement; campers were treated for hypoglycemia anytime a fingerstick blood glucose measurement was less than 80 mg/dl. Similar to last year, campers were not really restricted in their behavior; they participated in camp activities ranging from street hockey to full-court basketball, ate as they pleased, and slept in shared cabins. In line with the 2013 camp studies’ publication in NEJM, data from this year’s studies is tentatively anticipated around early summer 2015.

As a reminder, the MGH/BU team is currently testing the Bionic Pancreas in an 11-day multicenter home study (n=40 total, ten each at MGH, UMass, UNC, and Stanford); results from the first two patients were shared at FFL 2014 in July. Meanwhile, there are four studies slated for 2015: a chronic glucagon exposure study over ~12 months; a blood glucose set point study (~1H15) to examine different algorithm targets; an alcohol study to assess the PK/PD profiles of glucagon; and an additional pediatric study in newly diagnosed patients. The team’s goal is still to conduct a pivotal study throughout 2016 (n=100s, several months) and submit the PMA to the FDA in 1H17. The aim continues to be an FDA-approved platform on the market in late 2017 , when Dr. Damiano’s type 1 son will be head to college. Between now and then, key milestones – aside from collecting the clinical data – will include development of a dual-chambered pump and a stable glucagon for use in the final approved system.

For a snapshot of our learning-filled trip, check out the pictures below!

The youngest “bionic camper” – a six-year-old! – was thrilled to test drive the bionic pancreas 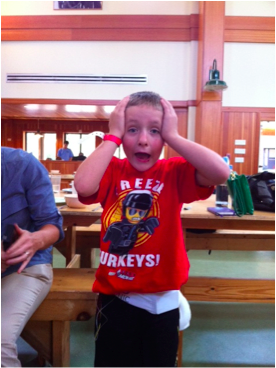 Daily calibration of the bionic pancreas with Dr. Russell 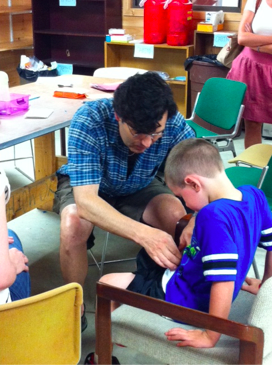 The Close Concerns team with another bionic superstar, posing with his “Go Bionic” carrying case 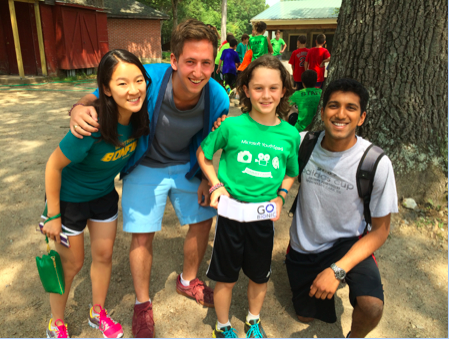 -- by Varun Iyengar, Melissa An, Adam Brown, and Kelly Close