CMS announces timeline for the next phase of Competitive Bidding Program for Diabetic Testing Supplies – December 18, 2014

On December 11, the Centers for Medicare and Medicaid Services (CMS) announced the bidding timeline for the next round of the competitive bidding program, including for diabetes testing supplies. [Insulin pumps do not appear in the product category list.] Interested suppliers will again have an opportunity to bid for Medicare’s business– with all parties beginning with a blank slate and no guaranteed carryover from the previous round. The process is beginning this week (December 18, 2014) in order to enable implementation of new prices and contracts by July 1, 2016, which would mark the three-year anniversary of the implementation of the last round of bidding (July 1, 2013). As a reminder, this program reduced the price of a 50-ct box of strips to just over $10 (a 68% drop from ~$32.47 in 2011) and devastated the industry’s profitability, incentives to innovate, and potentially resulted in patient harm.

Broadly, it appears that the competitive bidding process is the same as the first time around, meaning non-binding bids that drive the reimbursed price to ridiculously low levels, many unknown suppliers, and many low-quality, off-shore strips and meters. Medicare has retained the “50% rule,” whereby bids from mail-order diabetic supply companies must cover at least 50%, by volume, of all types of diabetic testing strips on the market. However, Medicare acknowledges that suppliers can still furnish certain brands “on a limited basis” to comply with the rule – in other words, more expensive, quality brand names that make it harder to adhere to a low-ball bid. See Medicare’s diabetes testing supply fact sheet for bidders here.

Based on government data, we also learned just how significantly competitive bidding has changed the Medicare mail-order market landscape. Notably, LifeScan has benefitted the most from the initiation of the program rising from ~9% of market share (in the three-month period of April to June 2013) to ~21% after the program’s initiation (July-September 2013). The mail-order market share leaders in the latter period were the Prodigy AutoCode (24%), LifeScan’s OneTouch Ultra Blue (21%), and Nipro’s TRUEtest (15%). See our complete summary of market share changes below, including why the 50% rule has not worked in practice (it is based on 2009 market shares!).

The big question going forward is whether the price of strips will remain the same, or whether some increase is to be expected as suppliers take stock of profits/losses since July 2013. As a reminder, Dr. James Scott (CEO, Applied Policy, Alexandria, VA) spoke about the unsustainable nature of competitive bidding at DTM 2014. He suggested that the program has required suppliers to sort through unforeseen bureaucratic challenges and red tape, driving costs up and leading to negative margins that they did not anticipate when bidding first began – see our full coverage of Dr. Scott’s talk below. We will be interested to see whether bids go up in this second round, or whether the $10 strip price was still profitable for suppliers.

Mr. James Scott strongly asserted that “the competitive bidding program is unsustainable,” sharing valuable new commentary we had not ever before heard. Most notably, he emphasized that the program requires suppliers to sort through thick red tape, as they are actually responsible for obtaining medical necessity information from doctors to get paid by CMS; doctors often ignore the request, and the CMS appeals process is long and inefficient. Mr. Scott proposed two solutions to make competitive bidding more sustainable: (i) treat national mail order supply bid winners like any other Medicare contractor (i.e., don’t make them obtain medical necessity forms); and (ii) Congressional bill HR 4920, designed to improve Medicare’s bidding program with binding bids. On the latter, he said there is a chance it could pass by end-of-year, or perhaps in March. The next round of competitive bidding begins in late 2015, and on June 30, 2016, the current national mail order contract will expire.

Slide from Dr. Scott’s Talk – Red Tape Faced by Medicare Suppliers, who must reach out to doctors to obtain medical necessity forms 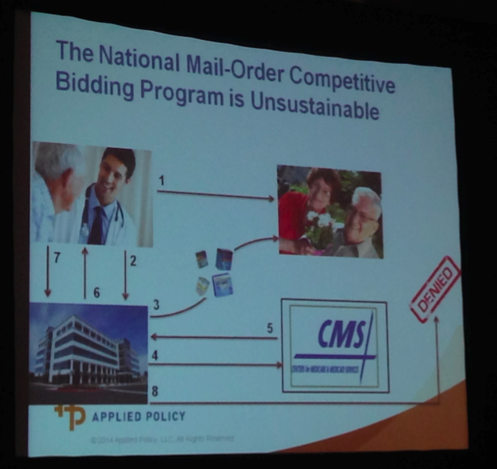